Alliance Air to restart daily flights from Delhi to Shimla

Asking For A Friend 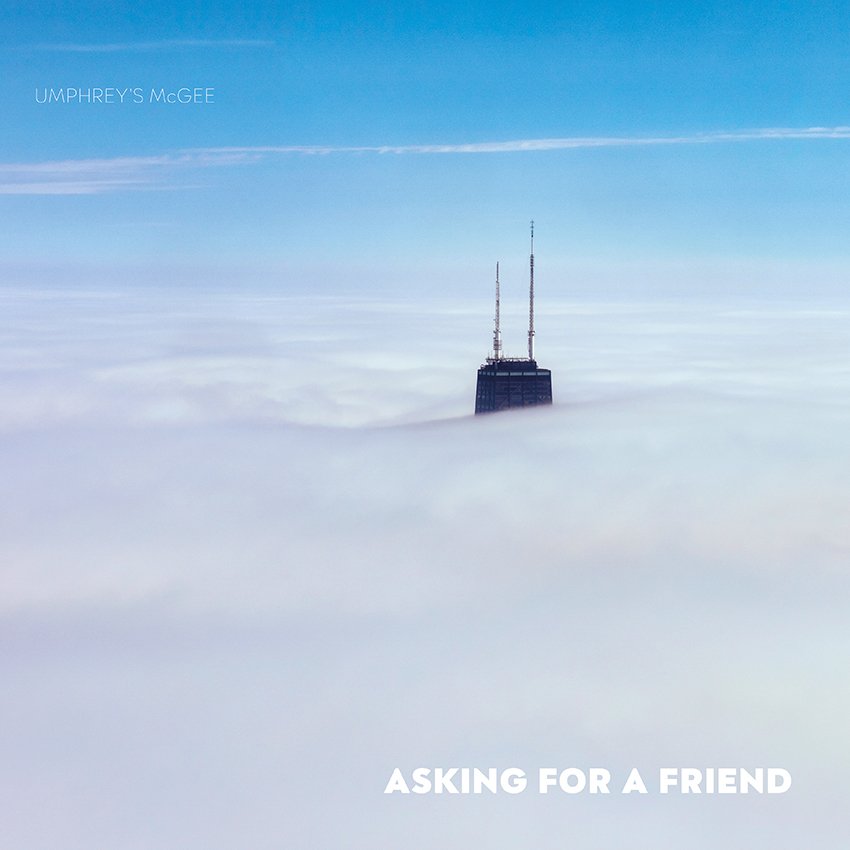 Asking For A Friend drops July 1st. And “Small Strides” is out now.

Pre-order the vinyl and pre-save the streams.

Singer-guitarist Brendan Bayliss had just landed in Los Angeles after a flight from Chicago, expecting to start a West Coast tour with Umphrey’s McGee, when he found a text on his phone. It basically said, “You’re going home.”

Keyboard player Joel Cummins, who lives in L.A., was in San Diego, squeezing in some golf before the shows, when his phone lit up. And guitarist Jake Cinninger was at his home studio in Niles, Michigan – across the state line from the University of Notre Dame in South Bend, Indiana, birthplace of Umphrey’s McGee – about to leave for the airport when he got the news.

It was March, 2020 – the first shock and whiplash of pandemic lockdown. After 22 years on the road and a dozen ambitious and eclectic studio albums, including the 2004 breakthrough Anchor Drops, 2009’s prog-rock trip Mantis and 2015’s The London Session, recorded in a single day at Abbey Road, Umphrey’s McGee – Bayliss, Cummins, Cinninger, bassist Ryan Stasik, drummer Kris Myers and percussionist Andy Farag – were grounded until further notice.

“I remember almost vibrating, like an anxiety attack,” Cinninger says now. “We were always in motion, going forward. It’s weird when that stops on a dime.” Cummins sat in his house, “just beside myself,” he says, “because I didn’t know when I would play music with my friends again.”

“Everyone was guilty of taking a couple of weeks, just staring at the sky,” Bayliss says. “Then you run out of excuses to not do anything.” Emails flew back and forth “with ideas and chord progressions” as Bayliss, stuck at home, worked on lyrics for a pair of songs already underway: “Always October,” an anxious meditation with a jolting chorus, started at a Nashville session in the fall of 2019; and the helplessness in “I Don’t Know What I Want,” a combined reflection on solitary confinement and heavy, personal loss. In June, 2019, Bayliss’ friend Jeff Austin, the former mandolinist in Yonder Mountain String Band, died unexpectedly. “I’m only looking for an antidote,” Bayliss wrote in the song. “What if I’m only asking for a friend?”

“I was thinking about a friend that I couldn’t help,” he admits, adding, “There’s something to be said for speaking your mind. If it’s a true emotion, it’s something everyone can feel: ‘Why is this happening to me?’”

Two years later, “I Don’t Know What I Want” – power-chord pop with a ska-type jump, like the Specials with jangle – is the opening track on the best and most emotionally direct album Umphrey’s McGee have ever made. Asking For A Friend (after the line in that song) is 14 songs of crisis and doubt, theirs and ours, that point forward again, made by a band that is best known for its live ritual – nightly spectacles of dynamic, collective improvising – but always goes into the studio with the same commitment. And never more so, Cummins believes, than now.

“Those first three months felt like an eternity,” he says. But “there was a huge excitement and motivation when we got back together again. More than ever, we realized how much we needed each other and this music.” As Bayliss sings over Stasik’s walking bass and the urgent groove in “Small Strides,” “I’m so tired of the run around/Everybody’s all wired to burst.”

By June 2020, Umphrey’s McGee were at Boondock, Cinninger’s studio in Michigan, face to face for the first time since they got sent home, firing up the stage-ready rock in “Ordinary Times” and cutting live basic tracks for “I Don’t Know What I Want” and “Fenced In,” an elliptical whirl of topically-charged funk. Notably, that last song marks the first time Bayliss – shaken by the murder of George Floyd in police custody that May and charged by the nationwide protests that followed – has used a particular expletive in an Umphrey’s song (“Hate is a motherfucker/One I could do without”). “At the end of the day,” Bayliss explains, “that was the worst thing I could say. And if there was ever a time to say it, this is it.”

The power-pop sunrise of “Pure Saturation,” also from Boondock, started as an instrumental demo Cinninger named after a pre-amp setting for his guitar. “I struggled with it for a while, trying to find something to put on it,” Bayliss says, until he got on the phone with a friend who was going through a divorce. “I was thinking about him, trying to write from his perspective. I wonder now if I’d been talking to somebody else, the song would have been about something else. But you write about what’s going on in your life. And this is what today is about.”

Umphrey’s McGee convened again in September, 2020, this time in the Chicago warehouse where they stored their gear, recording new songs during the day and playing live-streamed shows at night for tour-starved fans. “It reminded me of Aerosmith,” Cinninger says, referring to the Wherehouse, the legendary rehearsal space where that band made its classic 1976 LP, Rocks, “how they used the room to get that sound where the drums go ‘Boom!’ and the guitars are in this cascading reverb.” In “New Wings,” one of the Chicago songs on Asking For A Friend, “You can hear the room breathe,’ Cinninger claims, also noting “the happy major-7 chords everywhere, that mid-Seventies Paul McCartney quality” which inspired the title.

“It was three days,” Cummins says of Chicago, “but we got five or six tracks” – including “Work Sauce,” the album’s closing dilemma (“Is anything ever gonna be even just a little like it was before?”), scored in son-of-Van Halen guitars and arena-scale harmonies; and the group-written “Escape Goat,” the result of an online auction to raise funds while Umphrey’s McGee were off the road. The prize: a new song created by the band on a subject of the winner’s choice.

The result was an angst more profound than mere lockdown. “I talked to him for 30 minutes,” Bayliss says of the winning fan. “He wanted the song to be about old friends he had grown apart from, who were in different walks of life with other views. You don’t feel part of them, but you miss them and can’t wait to be together again, past all the bullshit.”

With a hypnotic tension Cummins likens to “Run Like Hell” on Pink Floyd’s The Wall, “Escape Goat” was nailed “in three or four takes. It isn’t super-complicated,” he goes on, “but that might be my favorite vocal hook of Brendan’s” – a soaring chorus of certain optimism in a time of short supply (“And everyone you’ve ever held or tried to hold on to/They’ll make your burden brighter”). “That one, live,” Cummins declares, “is going to be really powerful.”

“We weren’t sure we were even going to put it on the album,” Bayliss confesses. “We had 14 songs, but no one could agree on a bottom three. So we put them all on.”

Twenty-four years ago, in May, 1998, Umphrey’s McGee released their first album, an independent production of entirely original material playfully titled Greatest Hits Volume III. The original lineup – formed at Notre Dame by Bayliss, Cummins, Stasik and drummer Mike Mirro – had only been playing for a few months. Farag joined soon after the album; Cinninger came in 2000 from Ali Baba’s Tahini, a band of friendly rivals on the student-bar circuit; Myers replaced Mirro in 2002.

“It’s not lost on me how crazy it is that we’re still doing it,” Bayliss admits. “It’s more than half my life.” At first, the audiences were “roommates and friends. But then they’d see the same show five times. I had one friend – she said, ‘If you want me to keep coming, you have to get new songs. I don’t want to spend my Friday nights in a bar listening to the same thing.’ Then it became ‘If we’re going to do this, we’re really going to do it.’”

When I first wrote about Umphrey’s McGee in Rolling Stone, at the time of 2002’s Local Band Does O.K., they were doing way better than that – a rising phenomenon on the jam-band circuit, writing complex songs with modern-rock nerve and tight pop craft, then extending them in hairpin-turn improvisations that evoked, among other things, Rush, Frank Zappa, Steely Dan and Metallica, often all at once. It was, I said at the time, as if “Radiohead had been born a cheerful Midwestern bar band with brains.”

Cinninger calls it “the Joker card in us, the quest to combine all these ingredients and make it work for us. It’s what makes us popular.” Umphrey’s McGee still do it on record. For ZONKEY, issued in 2016, the band mashed up covers in improbable combinations of Radiohead, Beck and Phil Collins; the Beastie Boys and Ted Nugent; and themselves with AC/DC and Eddy Grant. And in August, 2021, as production continued on Asking For A Friend and Umphrey’s McGee gradually – and safely – got back on the road, the band dropped a surprise, instrumental album with a mile-long title, You Walked Up Shaking in Your Boots But You Stood Tall and Left a Raging Bull, comprised of new, studio recordings of the walk-on and walk-off music from their shows.

“We are still entrenched in the jam-band scene,” Cummins acknowledges. But Asking For A Friend “is not a jam-band record. There isn’t improvisation on it, really.There are guitar and keyboard solos. But this is an effort to keep things tight and concise, to get after the essence of what these songs are about.”

“The jamming thing is where our roots were,” Bayliss says, “playing live shows, not having enough material and having to fill time to get paid.” But he wonders how Asking For A Friend would be received “if it was released under another name. People do have expectations.” But bands grow up, “and this is the way things go.”

“I don’t think we have anything to prove anymore,” Cinninger contends. “It’s just about revealing yourself and being the best songwriter possible. We were writing this music out of need, out of grief” – personal and universal – “and getting great results.”

To Cummins, Asking For A Friend “doesn’t sound like any other album we’ve put out. We still have our feet planted in our old material. Every night is a different career-spanning set. But this new music feels like a shot in the arm. People who thought they knew what we were about will be surprised by what they find.”

The post <em>Asking For A Friend</em> appeared first on Umphrey's McGee.

Alliance Air to restart daily flights from Delhi to Shimla

Everything You Need to Know About the Call of Duty: Modern Warfare II Open Beta on Xbox

This Week on Xbox: Upcoming Releases and Updates

Summon the Spirit of Retro Shooters in Prodeus

Everything You Need to Know About the Call of Duty: Modern Warfare II Open Beta on Xbox

The Devil is a Part-Timer Season 2 Episode 12 Release Date...