The Walking Dead: Saints & Sinners is one of the premier virtual reality games. While it was a great title, it did leave a lot of room for improvement. That’s where The Walking Dead: Saints & Sinners – Chapter 2: Retribution, its exhaustively titled sequel, comes in. This follow-up has a lot in common with that pivotal first game but seems to be dialing it up in all the right ways.

Being able to skulk around at nighttime is one such addition. In the first game, players couldn’t travel after the sun went down since dusk marked when the zombies would overwhelm the streets. The undead will still travel in greater numbers at dinner time in Retribution, but it’s no longer a signal that it’s time to head out; it’s a time for thrill-seeking players to head back in. More risk will equal more rewards since late-night scavenging will yield greater resources for those willing to brave the darkness and utilize the new tools like UV flashlights and flares.

Adding in another more hardcore optional mode was based on player feedback. According to Head of Games Marketing and Publishing at Skydance Guy Costantini, players wanted something more difficult and Skydance Interactive wanted to deliver something that did more than just juice the damage numbers.

“We also knew that people wanted a challenge so we created a whole mode — night mode — for the game that’s sort of optional, but one you will probably want to engage with to become the strongest Tourist that you can,” he said. “Surviving there will take a lot of guile and skill. We knew a lot of players asked for something like that in the first game and we felt that we didn’t just want to make something harder, we wanted something to be different in its difficulty. Frankly, it’s what we also wanted.”

These nighttime modes won’t suddenly turn the game into a survival horror game, but they will naturally be more creepy. As Costantini noted, the first game rode a fine line between horror and tension and skewed more toward the former. There’s adrenaline inherent to surviving against zombie hordes when the stakes are high, but there aren’t scripted jump scares this time around and this sequel will still try to keep that delicate balance.

“We tried to be just about the same as the first game [in regards to how scary it is],” said Costantini. “We rode this really careful razor of a healthy dose of tension and stress without going too far into the horror genre. We felt it was very strong for the IP because this IP is all about tension and terror more than it is about gore, horror, or jump scares. There are definitely moments where you can be startled, but a careful planner will have a less stressful time.”

Players and critics alike also positively responded to the game’s melee combat, which has been preserved and enhanced for Retribution. Aside from the greater enemy variety (which players also requested), weapons can now be upgraded and equipped with certain attachments like a laser pointer that will likely lead to fewer missed shots; a boon for a game without a traditional reticule. There are new guns like a sawed-off shotgun and submachine gun that can both be used with one hand, opening up the possibilities during skirmishes.

Melee weapons, the linchpin of the combat, are similarly crunchy and reward well-placed slashes and stabs. It looks to be a lot like the first game, which is not at all tiresome because of how unique it all still is. The chainsaw is the biggest new addition to Retribution, something Associate Producer Andrew Fish Booth called the “premier melee weapon” of the game. This tree-cutting instrument has to be revved up and used with both hands, but will cut through zombies efficiently once it gets spinning. The controllers even vibrate accordingly with the engine, even stopping if the tool gets caught up in zombie flesh and bones. While a flashy and unique piece of equipment, it showcases the game’s dismemberment tech as players carve up walkers like a Thanksgiving turkey.

Night mode will yield more ways to play the game and progress, but Skydance is also giving players more freedom and diversity in other parts of the game, too. Named NPCs can still be slaughtered on sight and the story adapts accordingly, much like in the first game. There will also still be pivotal consequences in Retribution and ones that carry over from the first title. Skydance was coy on what those choices might look like, but Garrick is the embodiment of those choices. This person, who seems to be one seeking the title’s “retribution,” stalks the player and is a “formidable foe.” However, the team was also holding back on if he was like Resident Evil 2’s Mr. X — a consistent threat that organically stalks players — or Resident Evil 3’s Nemesis — a foe that only shows up at scripted intervals.

Retribution won’t have glowing arrows guiding players by the nose, meaning it is up to users to explore and find the objective themselves. But there will be more variety on the dangerous path to those objectives. One mission took place in a speakeasy, a more natural locale seeing as though the game takes place in the city now, and flipping a mission-critical switch started playing jazz over the speakers, which ended up being the smoothest zombie bait imaginable. Walkers poured in and it was up to the player to figure out that they could shoot down the speakers to stop the horde. 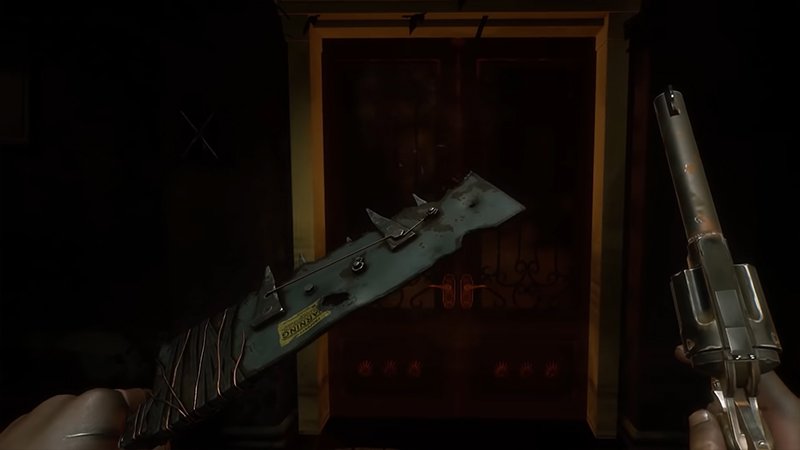 This small detail pointed out two parts of the game: its commitment to audio and its aforementioned upgraded take on mission design. The speakers didn’t have markers on them, so players had to listen to where the sounds were coming from in order to track them down. Costantini said 3D audio was extremely important to the team and audio behaves realistically, meaning closing doors is vital for muffling sound and the player’s real-life voices can attract walkers thanks to microphones built into VR headsets.

Tracking down the speakers is also more involved. There’s still plenty of sneaking and shooting, but that’s not it. There are more puzzles and dialogue options, which Costantini said was intentional. Some of these even take place in more vertical levels in direct response to the school level in the first game, a labyrinth of dark hallways and multiple floors. Some hated it, some loved it, but Skydance saw it as a way to flesh out its level design chops and match its more intricate quest structure.

“In the past, there was sneaking and guns blazing as our two major options of tackling tasks,” he said. “Now, I think we have added some puzzle solving and some dialogue options, which I think will give a lot more ways to tackle a problem. This will vary depending on the mission, the people who assigned the mission, and what you’re trying to accomplish.”

The Walking Dead: Saints & Sinners – Chapter 2: Retribution has more weapons, upgrades, and freedom within its gameplay, which are all features that sequels usually have. Piling on more stuff doesn’t always make a game better, but Retribution’s list of additions only seems to augment Saints & Sinners’ incredible foundation. With a stressful nighttime option, selection of new weapons, and expanded mission design, this follow-up seems poised to capitalize on the last game’s strengths and cement the immersive series as a virtual reality staple.