“A lone rooster named Keiji wanders around various cities of Japan while defeating mutant demons he encounters,” reads the series’ synopsis. “His ultimate goal is to find and kill the mutant dubbed ‘The White Demon’ who killed his sister in order to avenge her death.” 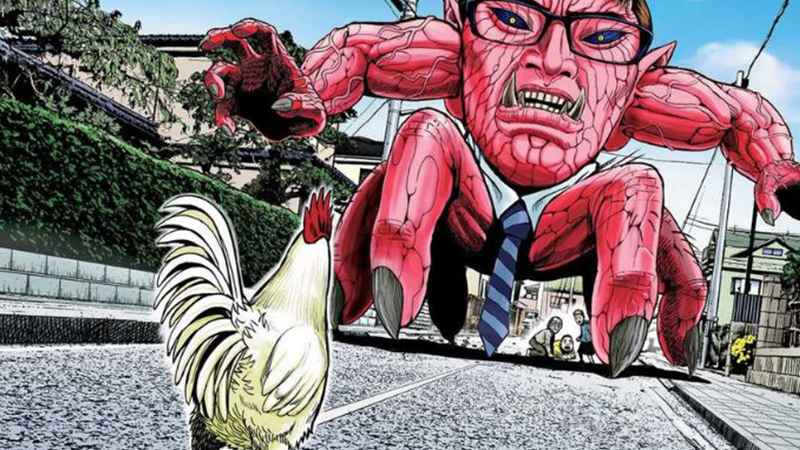 Spencer Legacy: What made you choose a rooster as your battle manga protagonist?

Shū Sakuratani: To be honest, I was actually in a bit of a rut trying to come up with ideas until I came up with a rooster. I had gone through several other types of living beings, but a rooster felt like the perfect fit. When I was little, I actually had a rooster as a pet, so that may have influenced me. Once I had a rooster set as my protagonist, everything else came together quickly from there.

Were there any other animals you initially thought about using as the main character?

This overlaps with my previous answer, but I really thought through a lot of options! I didn’t even limit myself to animals–I considered fish, insects, reptiles … having gone through all of those options may have ended up influencing the designs for the kaiju! *laughs*

Is it difficult to portray action with a non-human character?

It’s always tough trying to figure out how to make a little rooster’s attacks look impressive and powerful. They also only have two legs, so there’s a natural limit to how they can move as well. I spend day and night thinking of ways to compensate for it.

I love movies, so I always make time to watch them. I think I may have been influenced by the late, great actor Ken Takakura’s overwhelming yet taciturn presence. I also love Clint Eastwood’s Gran Torino, so it may have influenced this series as well.

If Keiji could battle any character, who would you like to see him fight?

I’d love to see Keiji take part in an intense aerial battle with one of my favorite characters of all time, Spider-Man … but I can’t say with confidence that Keiji would prevail! *laughs*

What would you like to say to international fans who enjoy Rooster Fighter?

I’m so thankful for all of the support I receive from places all over the world. I look at every message I receive on Twitter. I had no idea this series would be so beloved. As a manga artist, there’s no greater joy than that. Thank you so much!

The best gifts for photographers in 2022

Tech gifts under $50 that make great stocking stuffers in 2022